SSeptember ends with an important step for the Panama Canal towards decarbonisation. The Panama Canal and more than 150 other maritime value chain organizations have signed an industry appeal for world leaders to commit to decarbonizing international shipping by 2050. Leaders to support projects zero-emission shipping on an industrial scale through national action and provide the policy measures that will make zero-emission shipping the default choice by 2030.

As quoted in a new note released by the United Nations Global Compact establishing a 1.5C trajectory for shipping, the Panama Canal has set its own decarbonization targets while establishing initiatives to encourage shipping companies to minimize their carbon footprint, by demonstrating the measures that can be taken to accelerate decarbonization throughout the maritime transport value chain.

The Panama Canal’s goals of becoming carbon neutral by 2030 were officially announced in April 2021, but it began tracking its carbon footprint in 2013 with the intention of better aligning its operations with global targets for reducing emissions. emissions to mitigate and adapt to climate change.

Ahead of the critical COP26 negotiations in November, the Panama Canal and other signatories of the Call to Action on Decarbonizing Shipping are now urging world leaders to:

Put in place policy measures that will make zero-emission shipping the default choice by 2030, including significant market-based measures, taking effect by 2025 that can support the commercial deployment of zero-fuel ships and fuels emission in international shipping 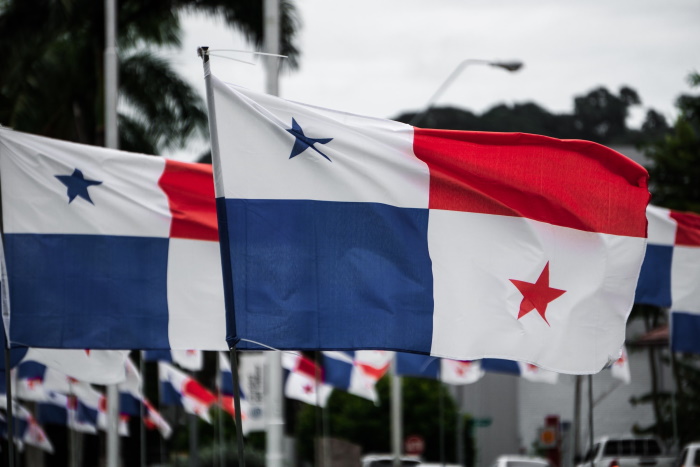 Following this important step towards decarbonization, the members of “Getting to Zero” are moving forward to reveal their carbon references. Signatories to the call to action said they wanted incentives such as market-based measures put in place to accelerate the shift to zero-emission fuels, and a clear roadmap and just for decarbonization to be established by governments.

But the Getting to Zero audit of the 150 Call to Action signatories showed that only 80 of them, or just over half, currently offer full transparency on their greenhouse gas emissions performance. tight. The group said emissions transparency is the “necessary first step in decarbonizing shipping.” Most of the group’s members also seem to fall short of the commitments they are now demanding from governments. Six signatories said they aim for full decarbonization by 2040 and only 46, or less than a third, said they plan to achieve full decarbonization by 2050. 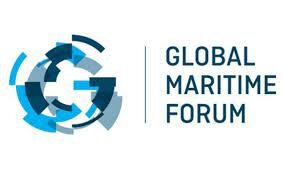 At the same time with the Panama Canal milestone, the Poseidon Principles will raise their emissions compliance standards: this decision follows the World Maritime Forum’s call to action for decarbonization of shipping in which 150 signatories have called on governments to meet the ambitions of the Paris Agreement and achieve the zero-carbon target for maritime transport by 2050. So far, 27 major banks have joined the Poseidon principles representing $ 185 billion in ship financing. A key demand of the Call to Action is that governments put a price on carbon to encourage the transition to low carbon fuels.

Lloyd’s Register Acquires Data Intelligence Company: The British classification society has acquired GreenSteam, a marine data intelligence company specializing in improving vessel efficiency through machine learning. The acquisition will be integrated and managed by i4 Insight, a subsidiary of Lloyd’s Register. i4 Insight, part of LR’s Maritime Performance Services business, is a digital platform that enables shipowners, operators and charterers to access information on vessel performance and the fuel consumption of their fleets. .

Royal Caribbean plans further emission reductions by 2025: After meeting its goal of reducing carbon emissions by 35% from a 2005 benchmark, the US cruise company Royal Caribbean Group has pledged to further reduce its emissions by 25% by 2025 from the levels In addition to the emission reduction target, the 2020 report indicates that the company has met or exceeded almost all of its sustainability targets for 2020. 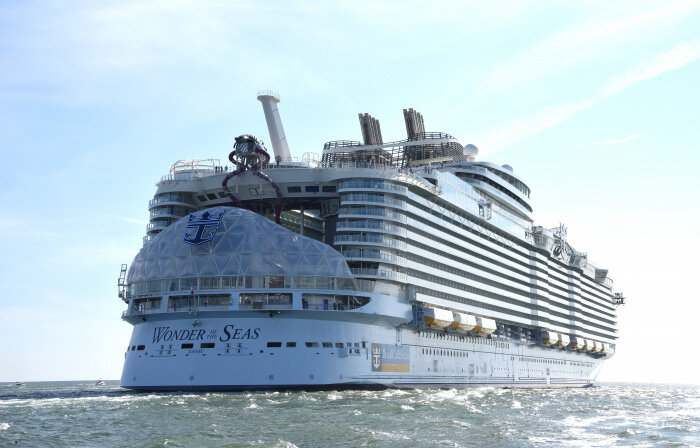 BV has issued the design approval for what will be the largest VLGC in the world: The design of the VLGC “Panda 93P” was developed by Jiangnan Shipyard, a Chinese manufacturer of gas carriers that is part of the China State Shipbuilding Corporation (CSSC). Sinogas, a Singapore-based gas owner, has placed a firm order for two of VLGC’s 93,000 cubic meters (cbm), with options for three more vessels. When delivered, these ships will be the largest VLGCs in the world and will be powered by liquefied petroleum gas. When in service, the new design will reduce CO2 emissions by approximately 32% compared to the previous generation 84,000m3 low sulfur fuel oil (LSFO) VLGCs. This reduction reflects the highly optimized design and economies of scale, as well as the use of LPG as fuel. 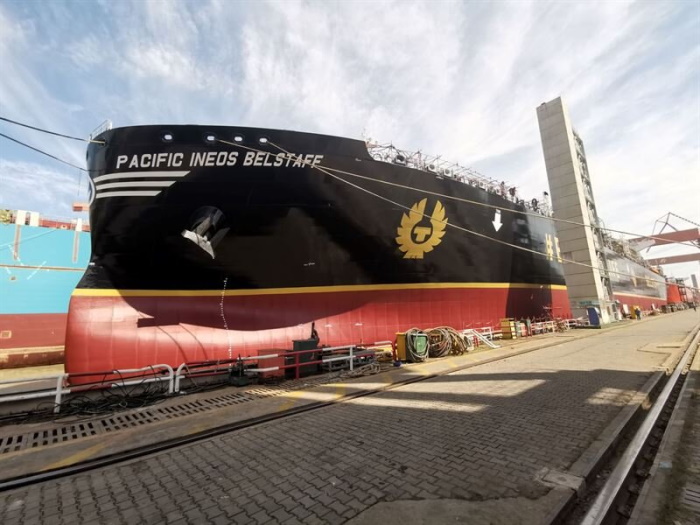 ABS has granted approval in principle (AiP) to French engineering company GTT and Finnish ship designer Deltamarin for the design of the Aframax LNG carrier: This new design of an LNG-fueled tanker uses GTT’s membrane tank technology. While GTT was designing the tank, Deltamarin was studying its integration into the ship. The design provides a solution that complies with the environmental regulations of the International Maritime Organization (IMO). Compared to a standard tanker, it reduces CO2 emissions by at least 20%. It also offers increased autonomy without reducing the loading volume 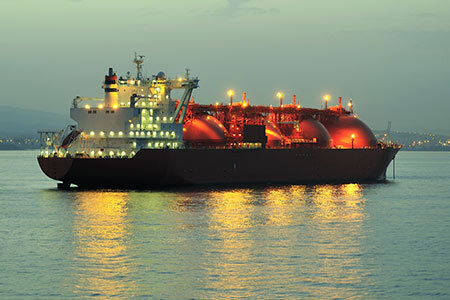 LR, HHI and KSOE will develop digital twin technology for LNG carriers: The agreement was signed at Gastech 2021 to support the digitization of the maritime industry and the growing demand for large-scale LNG carriers. As part of the MoU, KSOE and HHI will further develop Hyundai’s Intelligent Digital Sister Ship (HIDTS) for a Type B gas containment tank suitable for a 174,000 m3 LNG carrier. 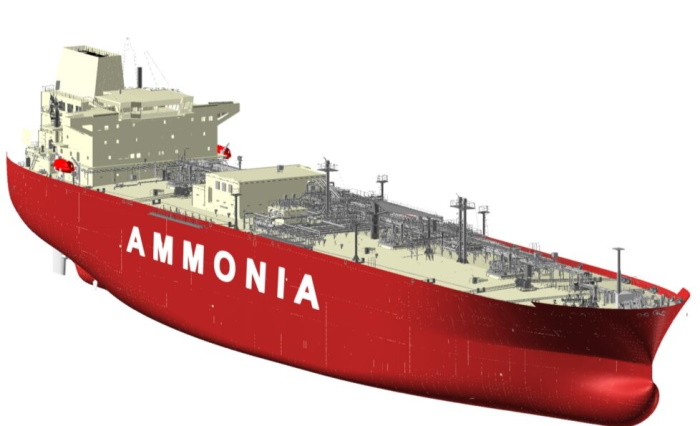 The NP20000X ULAM design is designed to be Jones Law compliant and capable of meeting future demands in the offshore wind market, involving 15-20 MW wind turbine installations. Its innovative approach loads the monopiles vertically onto the 8,000 m² deck, eliminating the need to rotate the monopiles to a vertical position at sea, ABS explained.

Wärtsilä and Finnish-Swedish ferry operator Wasaline have signed a ten-year optimized maintenance contract for the Aurora Botnia LNG ferry: The parties signed the agreement in June 2021, but it only entered into force in September. The Aurora Botnia is a 150-meter passenger and car ferry. It can run on both LNG and biogas (LBG), equipped with Wärtsilä engines. The ship’s propulsion is based on a hybrid solution comprising the Wärtsilä 31DF dual-fuel engine and batteries. The Wärtsilä 31DF will also be able to use BioLNG, a fully renewable fuel that can reduce CO2 emissions by up to 90%. It emits no particulate matter and near zero levels of nitrogen oxides (NOx) and sulfur oxides (SOx). 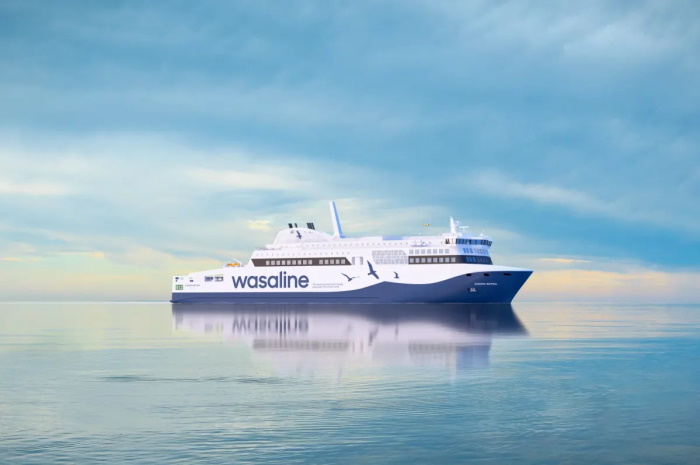 AP Moller – Maersk accelerates the development of eFuel with the latest investment in an American start-up: The Danish shipping giant has invested in the American start-up Prometheus Fuels, which focuses on the development of economical and carbon-neutral eFuels for shipping. This investment is being made through Maersk Growth, the venture capital unit of AP Moller – Maersk. The company expects several fuels to coexist in the future fuel mix and has identified 4 potential decarbonization pathways: biodiesel, alcohols, lignin-enriched alcohols and ammonia.

The investment supports its efforts with electrofuels that include alcohols produced from renewable energies. Along with biodiesel, alcohols, including green methanol, are already feasible fuel technologies today, according to the shipping giant.

Teco 2030 receives government assistance for the production of fuel cells: Norwegian company Teco 2030 has received up to NKr 5.4 million in indirect government support for the development of its first semi-automated hydrogen fuel cell production line at its new fuel cell plant and center innovation in Narvik, northern Norway. The support was provided through the Research Council of Norway’s Skattefunn program, which is a tax deduction program designed to stimulate research and development (R&D) activities in Norwegian companies. It provides indirect support in the form of tax deductions on the costs linked to the research and development activities carried out. 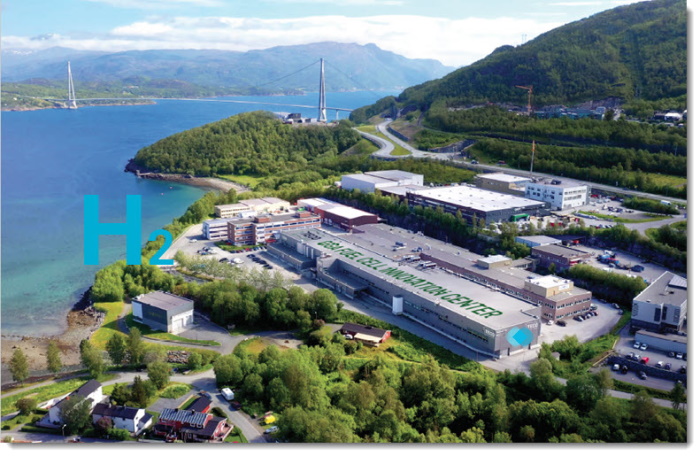 Does Amazon need a separate network to ...